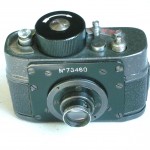 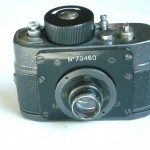 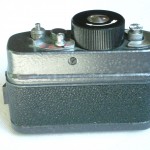 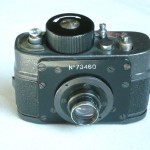 F21 KGB CAMERA
Manufacturer : Krasnogorsk Mechanical Factory “KMZ”Krasnogorsk USSR
Date’s : 1951-1980.
A small camera with spring motor film advance ,looks like a Robot camera .
Originally made for the KGB in a separate area of KMZ they lack a view finder indicating their special purpose use.
The cameras are often found complete with spare double cartridge in special metal cases. The camera should have a serial number on the front above the lens
The 35mm film slitter cuts film to 21mm but standard film is too thick to fit the confined space of the magnesium cassette. Ultra thin base film is needed. The image size is half-frame, but in the same horizontal position as standard horizontal position as with 35mm cameras.
Lens: f2,8/28 mm (stamped on the inside of the lens flange.
The button camera is a concealed version of the F-21 in a special housing with remote release attachment to the front of the camera. The camera remains hidden with the lens concealed by a coat button. The centre of the button splits open when the remote is squeezed which simultaneously fires the shutter of the camera.