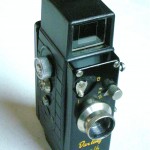 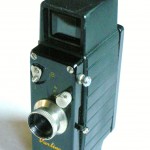 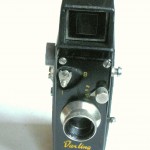 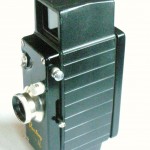 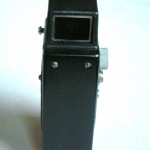 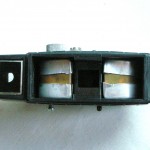 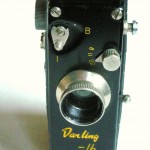 DARLING 16 CAMERA\
Manufacturer :Shincho Seiki Co Japan.
Dates ± 1957
Vertically styled subminiature camera .
Made of black plastic with metal covering front and back.
Makes 14 exposures of 10x12mm on 16mm un perforated film,on cartridge that is similar to the Mamiya cartridge .
Lens :  35mm fixed f8,0, f11,f22 giving it an equivalent of 85mm lens in the full framed 35 format.
Two speed shutter ,B and 1/50sec.
It was only available in a black bakelite body .
There are also variations in the dials on the side of the camera.
This camera is with the yellow letters ,and is the first version .I
It has no flash synchronization.
Its aperture is selected by a small knob above the lens, with three positions: 8, 11 and 22. Its lens rim is fixed and chrome finished. This version is known with yellow engravings.
The second version has a pc  synch socket,this version is known with red, orange or green engravings.
The third version  is only known so far with green engravings.
And the last version is a name variant called Albert ,  inscribed Albert fifth avenue New York under the lens. and was made for promotional purpose .